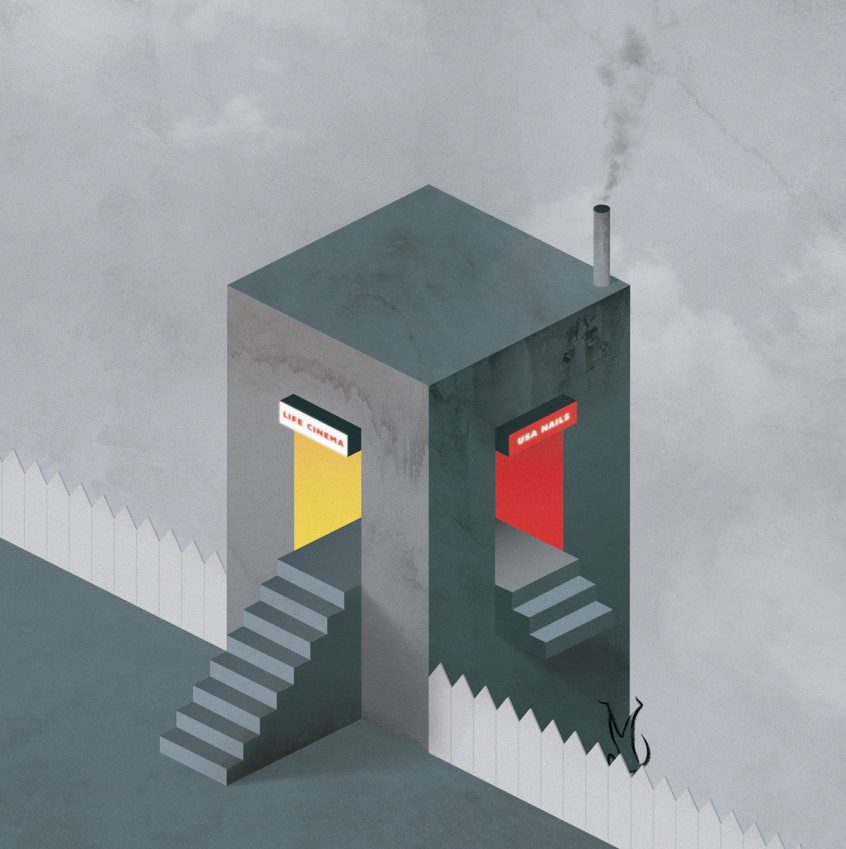 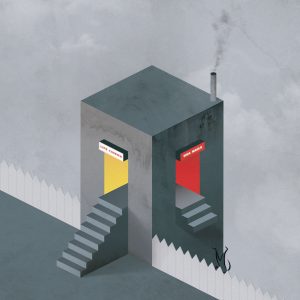 If USA Nails continued down the burrow of total darkness on the morbid scrape that made up their third album, Shame Spiral, then surely they should be on their way to crawling out the other side? It’s a little yes, a little no, a little shut the fuck up. Signed to the newly formed Dipped In Gold Recordings (formerly Too Pure) and with a new drummer in tow (the powerhouse of Matt Reid appears absent), Life Cinema is their fourth album and goes some way to contain their most experimental, raw, hilarious and angry recordings to date. Vocalist Steve Hodson’s deadpan inflection is the long-running mainstay to their sound, clattering savagely into the antagonistic and grubby fuzz of static that belches forth and it’s great to hear it again on this new material.

Pissed Jeans are obviously a huge, huge influence on the USA Nails sound, style and subject matter. Crossover similarities with everyday mundane topics of attending work drinks, to the grim cesspit of social media, consumerism and pointless jobs all fit the Pissed Jeans template, but for USA Nails, it falls even further into the realm of horrible warnings and dead-end careers tainted with self-loathing. Smile immediately cements this sneering feeling of disgust, through a barrage of scrambled drums, rusty, scraping guitar lines and a snotty, arrogant blast of a chorus, with Hodson screaming the title track into your nearly perforated eardrum.

The volatile consumer-baiting Creative Industries (a rebooted version from the Work Work Work EP) contains the brilliant chorus line of “Instant this/Instant that/Instant nothing” which is spat with such disdain and is summed up with sing-song refrain of “I don’t want know more” by Hodson, channeling that artful and morose “get fucked” attitude with equal mixtures of displeasure and withering mockery.

My imagination could be playing tricks with me, but the echoing, see-saw riffs on the title track sound like mocking laughter. The noisy, disgruntled bass-heavy shred does nothing to dissuade or improve that feeling of genuine unease as your implored to “tune in, and flat out/tune in and turn off.” It’s a finger-pointing taunt about how robotic and consumerist everything is and how the listener (aka, me, you, everyone) will absorb any old garbage. The scrambled punk rock of Man Act barrages past with breathless and caustic energy, whilst drenched in feedback, You Wish, staggers after it, a belching, squealing slug of METZ-worthy, polluting noise of distorted robotic-vocal bleats and this screeching assault of sharp, spiky and unwholesome chaos. That’s what it is though; splattered, splinted chaos shoved through this taunt and broken spectrum.

Whether It’s Ordinary is meant to be a sort of odd sequel to Automated Cyst from their second album, No Pleasure, I’m unsure – it has that similar monotone of hopelessness and dredges up feelings of loneliness and despair. The track’s title is repeated in this hypnotic, unfeeling way, whilst the scathing fuzz-coated guitars stab through like Michael Myers at a summer camp. The excellently named Work Drinks is basically a short story about attending drinks with colleagues and stirs up conflicting feelings of being a complete fraud and an absolute suit and is actually, really fucking depressing, yet contains the excellent bragging line “I am a pillar of industry.”

A Sense of Self Will (the last proper track before the Life Cinema chiptune reprise) channels punishing, desolate chords against this drain-gurgling spiral of twisted noise; it’s the feeling of hands gripping your throat and pulling you down into the mire, never to be seen again.

Life Cinema is far from depressing – it’s immensely cathartic and hostile in its delivery – from the scrawled, noise-punk fury of tracks such as the batshit A Fair Nickel to the creeping dread of Little Does He Know, USA Nails  continue to hack, carve and flesh out this ghastly totem of their acerbic and unique sound. If you enjoyed their previous albums, Sonic Moist, No Pleasure and Shame Spiral, this will cut a delicious grin into your face.

If you want to experience your own life cinema, with erm… Life Cinema by the family fun-time band, USA Nails,  you can purchase it from Dipped In Gold Recordings (UK), Hex Records (USA) or Bigout Records (FR).