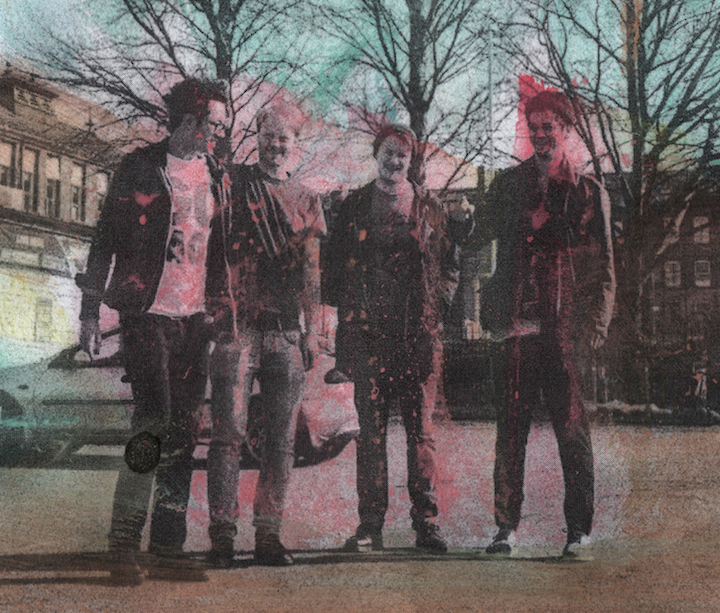 “We’re USA Nails and this is our last song” monotones vocalist Steven Hodson to the packed crowd at London’s Heaven, back in November of last year. Bearing in mind, this is uttered at the very start of USA Nails‘ set and already the deadpan delivery of their wild-looking frontman has won most people over. The rest, who don’t get the shtick, are then floored by their abrasive, snarling post-punk weirdness and you can clearly see why they were on tour with Future of the Left. But that was nearly a year ago and a lot has happened since then – constant touring, compilation appearances, being signed to the incredible Smalltown America and recording their debut album, Sonic Moist.

There’s an anti-hero hostility to USA Nails – they marry contempt with discordant punk rock in a way I’ve not heard before and it’s both creepy and refreshingly original. The ten tracks that make up Sonic Moist are laced with defiant and antagonistic bitterness, with a trace of deep arrogant humour punching through the other side. Featuring ex-members of Hawk Eyes, Oceansize, Silent Front and KONG, USA Nails attack music with no-nonsense, stripped-back zeal.

There’s underlying darkness throughout Sonic Moist – its leering at you across the bar, chewing on a tooth pick, trying to make eye contact. You can feel that uncomfortable stare boring into the back of your head. You best drink up quickly and leave, don’t bother waiting for change. Tracks like Oh Caroline exemplifies this perfectly – a ragged, debauched, bass groove drags it along like a tormented individual hefting a heavy weight from the boot of their car into a shallow pit. Vocalist Hodson unravels his unrequited affection for Caroline in a drawled monotone over layers of murmuring grunge-punk exhaustion, leaving you feeling uncomfortable and dirty. At the other end of the spectrum, the snapping fury of Chain of Command is a jarring blast of agitated work-bashing punk rock delivered with spitting, gleeful menace. “I’m sick of piss, dripping off my clothes…” growls Hodson, continuing to launch a caustic attack, mainly about the  smell of Jack Daniels on his shirt and your boss buying all of your drinks.

The ten tracks that make up Sonic Moist are laced with defiant and antagonistic bitterness, with a trace of deep arrogant humour punching through the other side..

The video to Sometimes I’d Rather See It All brings to mind the deranged mad howling of Ireland’s Girl Band. Complete with epileptic inducing visuals, blood pouring down the screen, Hodson’s terrifying vocals, which sound as if they’ve been filtered through a broken telephone (Coachwhips-style) and the stop-start theatrics from guitarist Gareth Thomas and bassist Dan Holloway, it’s an absolute blast. As Hodson winds the microphone lead around his head multiple times during the flickering, twisted visuals, it’s a reminder of just how dark and disturbing you  can make music that oddly reminds me of Drive Like Jehu having a breakdown. The abrasive directness of Pissed Jeans shines through on the rambling, garbled bark of Shite At The Palladium, which is under two minutes of strutting noise-punk snarl.

Distilled Town throws in some slick pop-hooks amongst the unpolished ramshackle of gnarled garage rock and blister-inducing drumming from Matt Reid, which is achingly-tight and direct. The noise-rock punishment of the nihilistic Am I A Man Or Not tears past at an unrelenting, breathless pace, concluding in a scrawling, chaotic ending of howling, disenchantment. “YOU’VE GOT A SHIT EATING GRIN!” sneers Hodson at the beginning of the thundering pummel of  Push Him Back Where He Is From – a rampant, garage-noise-punk splatter of deranged heaviness. Closing track, Un-name Everything, is a caustic, breathless rush of demands to eradicate labels from all things. It’s angry and demented – riffs collapse over each other like crushing, frothing waves, engulfing in a foaming fury of agitation and loathing.

Out of nowhere, USA Nails have created something quite special. Sonic Moist is the sleeper hit of the year – ten tracks of twisted, uncomfortable, jarring garage-punk eccentricity fed through the weirdness machine.