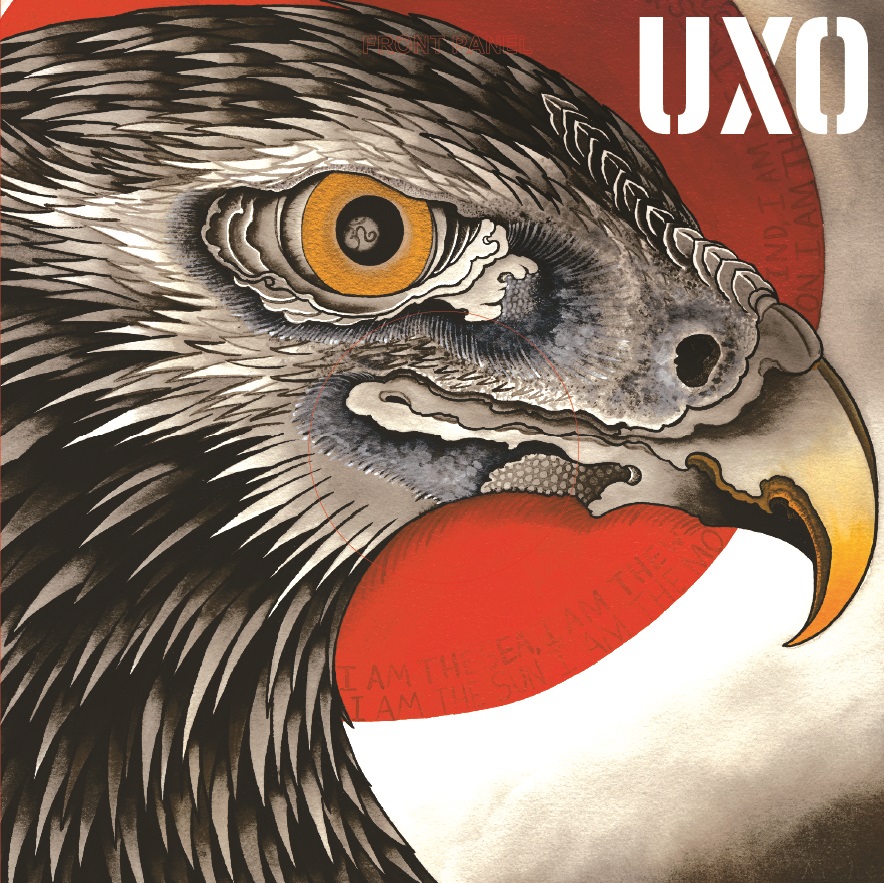 There’s no way this was going to be a fun-time stroll in the park, not by any sense. But, enjoyment comes in many forms and if you like the idea of two giants in the noise-rock circuit trading neck-straining bile with each other over razor sharp riffs, then “hello, this is your new favourite album!”

UXO is a project formed by Steve Austin of metal/noise/haters of everything, Today is the Day and Chris Spencer of Wreck-merchants, Unsane with the help of bassist Aarne Victorine and drummer Patrick Kennedy (who jammed with Austin in the band Taipan). UXO isn’t a comfortable listen by any means – it twitches and snaps like a hair-trigger temper on an unpredictable mob Capo. One minute it’s sitting there, nodding along, maybe the odd smirk – but then suddenly, it snaps – it’s over the table, grabbing you by the lapels and brandishing a blade out of hammerspace and is pressing it into a squishy area about your person.

Depending on how you view this, it’s mostly the wild, sporadic side that takes centre stage, channelled by Austin and Spencer, who are content to sit as the double-headed eagle of UXO’s barrage of noise. On opening track, the appropriately titled Bitter, both gentlemen trade lines back and forth as a spectacularly volatile call and response, under the rumble of disgruntled and seething guitars, whilst Victorine’s bass hums and grinds like someone attempting to clear their throat for a good four minutes of hacking and spitting. It sounds utterly furious and constantly on a knife’s edge, cutting at the air. The next track, Trauma, follows a similar pattern – Austin and Spencer rushing to finish each others barbed shrieks, whilst the rust-covered noise-hardcore bombardment rains down; a crushing and twisted menace of chewed, gnarled riffs colliding to create something that sounds like  Miami’s Wrong fed through the meet grinder, by way of Southern-rawk.

Big fan of Austin’s evil whisper at the start of Blind Suicide – “I’m lookin’ for action…blind suicide…I’m part of the programme, password declined…” he utters, through a possible malevolent sneer as this track, creeps forward, exploding into full barbaric force on the chorus as it spins out of control, blades out, mincing everything in its path through this dark, near-industrial wave of frothing noise-rock. One to lose your mind to in the pit that’s for sure. (Also, what is that noise is around the halfway park that sounds like a lawnmower starting up?)

Things are slowed considerable on the scrape of Everything’s A Mistake; vocals are near buried beneath the wave of sludge-laden feedback, as melody is rightly sacrificed. It’s punishing and crushingly despondent; bringing to mind some of the more depressing songs from Cherubs’ Heroin Man (cracking album that) and this haze of sinking into a bath, nursing a beer and never wanting to be disturbed ever again. It’s alienating; grief-stricken and full of buzzing, bruised anguish. This Won’t Take Long, sounds like something a person utters before the torture interrogation happens. Huge ‘fuck you’ scrambles of rasping guitars are met with those spitting dual-vocal cries and Kennedy’s tight, marching drum beats. It ends with the uncomplicated and heavily brusque beatdown of User, a furious and thunderous lesson in noise-punk – Austin and Spencer’s voices have reached peak levels of “we will caused total wreckage” as they both attack the microphone, adding their duelling vocal tag-team of high-pitched, throat-rasping hate and the gruff, indignant bellow of boiling blood. “HOSTILE! HOSTILE!” they both roar, before descending into screaming the words “USER! USER! USER!” in each other’s faces, reaching high levels of lurching, spite-filled rage.

Unexploded Ordnance? This is a ticking time-bomb of ugly, mutilated riffs, crunching breakdowns and savage, bleeding raw-rock that howls and bellows to be heard – invest now.