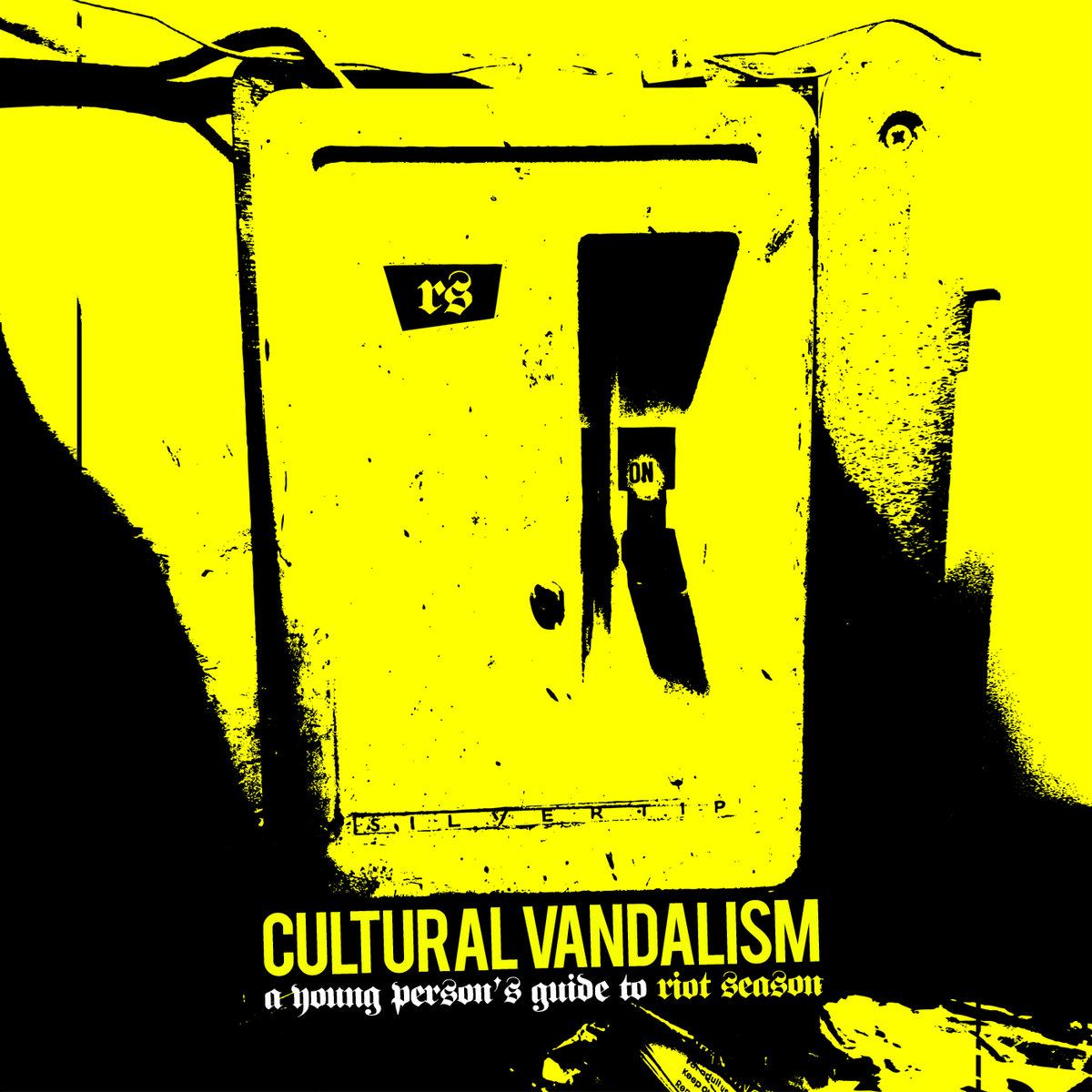 Riot Season – an undiscovered gem in the underground world of noise, punk, hardcore and general destruction to eardrums. For those uninitiated with this label, there’s good news for you – they’ve put up a compilation of the majority of their bands (past and present) up on their bandcamp page, hurrah! Named Cultural Vandalism: A Young Person’s Guide to Riot Season it does exactly what it says on the slightly melted and dented tin.

It begins with the solemn creep of Sigh On by Early Mammal – which sounds like it should be soundtracking the concluding episode to a certain cowboy-influenced drama series. The echoing, layered vocals have a slight melancholy edge, whilst the minimalist, bass plod and crisp guitar tones meld together. “You bring the rain….” is intoned with such loss and regret, it feels so incredibly personable – should we even be listening? A haunting start. Dodge Meteor (not the car) on the other hand, couldn’t give two fucks about feelings, apart from mashing them beneath the wheels into a sticky paste. From Newcastle, this duo create swirling, rampant, dream-altering sounds and Slipstream, is an absolute beast. The guitars paint a distorted rainbow pattern of morphing shapes, whilst the cymbal-heavy percussion is a crushing statement of harrowing intent – oof.

Experimental merchants of chaos,  Shit and Shine reveal an evil smile in the form of Ibanez Destroyer a part song-part-CB-radio chatter mash up of extreme bludgeoning raw power. Taken from their latest album, Teardrops, this is a pulverising, ugly mess of crusty guitars, dirty, filth-encrusted riffs and fuzzing, electronic twitches, squeaks and shrieks. At times, this feels as if the track has been sliced apart and scattered to the four winds, whilst the indistinct and distorted radio drawling, gives this a “I’m lost in this horror movie how do I escape” vibe. Odd and fairly amusing to say the least. Khünnt (how do you pronounce this?) sound like the result of the titular creature from It Follows forming a band with Satan. The barely human screams are terrifyingly bleak, whilst the repeated, sludge-noise drone gets more and more caustic and demented as the track chews through everything in its path, like a relentless, remorseless eating machine made of hate.

Chucking a beer can in the air and batting it into your face, Workin’ Man Noise Unit contribute the blistering, reefer-wrapped blast of fender-bending stoner-punk in the form of Icegrill 420, one of the many standout tracks from their 2015 record, Play Loud. Riffs? Yeah WMNU have got them mate, coated in feedback, noise and belching. The sly grin of Henry Blacker appears in the form of Shit Magnus, another sludge-rock offering of growling riffs, seething, distorted vocal barks and restless loathing – throw them horns skyward. The head rush of smoking delight that is New Cruiser from the brilliantly named Blown Out, is fan-fucking-tastic. Although only a part of a 15 minute track that makes up half their new album, this is an enormous space-metal-stoner-anthem through a mesmerising surf of solid rhythm and swirling, shoegaze bliss.

Getting more upbeat, Tropical Trash pedal a strong line in low-fi garage punk, as UFO Rot would have us believe, hey, when your opening line is “it’s not just any Nazi haircut…” then you’re on to an hilarious winner right there. The attitude on this is fantastic; it’s so “fuck off, can’t be bothered” like if FIDLAR really didn’t give a fuck about that dog’s life. The drums are massive (bit METZ) and dwarf everything – absolute banger. Bad Guys bring some terrific humour with their sound; squealing power-metal passages, mixed with contemporary stoner-rock, scything noise-guitar lines and a vocalist with a cracking set of lungs, like some weird hybrid of Lemmy and Creston from Harvey Milk. Barmy and brilliant.

Sloath drive a truckload of fuzz up to the door and spill its contents everywhere on Juvis Priestly, scratching the edges between psych-rock, with a blues-edge and of course, that slow-burning doom edge, with murmuring, almost chanting vocals layered on for good measure. There’s something oddly upbeat about this though; there’s no despondency, rather, an optimistic angle and it has one hell of a groove. Transition From A Cube To The Octahedron by Doctor Moreau appreciators, Menimals, is hauntingly beautiful (and reminds me of Before Nostromo) The whispering, spoken-word storytelling helps fill the space, as do the shifting passages of sparse but intense sound created – stunning and achingly abstract, there’s so much going on here it will take time to absorb completely, but…wow.

Dethscalator (who I think have split up now?) are just morbidly unsettling. Midnight Feast might be a song, it’s hard to tell, as every part of this bare 3 minute track, fizzes, cracks, pops and oozes some kind of infection – disgusting and oddly amazing. Hey Colossus (who share band members with Henry Blacker) operate in a similar zone of uncomfortable noise. ON The Drang, I wouldn’t be surprised to find out it was recorded in an industrial steel works during a busy period. This is relentlessly abrasive, claustrophobic and savage to the ears and brings to mind elements of kraut-rock terror fed through the Shit and Shine filter of pure anarchy. Honestly, makes the Butthole Surfers seem like a pop-punk band. Tokyo’s Mainliner, enter the wormhole and come back completely wrong (or right depending on your viewpoint). Taitan is a song and at same time isn’t – built exclusively from charred feedback, mangled strings, oddball reverb, howling terror and even more feedback, you can tell it’s seen the kind of horrors that no man should see.  Final track comes courtesy of Keep It Fast favourites, Art of Burning Water, who leave it to the blast-beats to do the talking on this thrash-tastic, grind-hardcore bludgeon of revolting hate and a “burn everything to the ground” attitude.

This pay what you want – so go on, treat yourself (and Riot Season) and get on board.