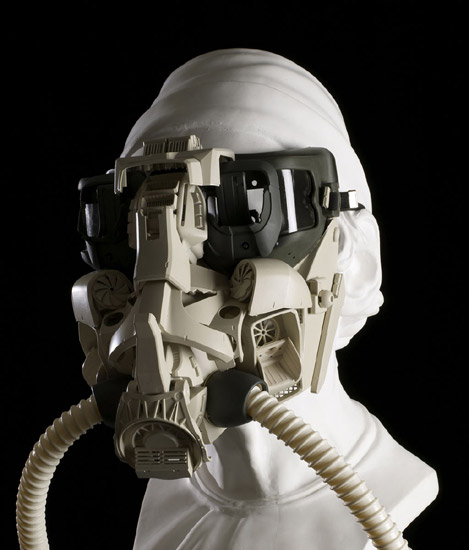 When The Mad Capsule Markets moved to temporary quitsville, a town that currently houses Reuben, System of a Down and Fugazi the annoyance level was palpable. The chilling words: â€œwe canâ€™t decide when we can re-start again as the band, at this pointâ€Â had a nail-in-the-coffin-vibe ofÃ‚Â  â€œMCM are dead.â€Â Thereâ€™s no denying that their heavily synthesised/techno-punk, nu-metal-gabba freakout was perhaps an acquired taste. Several acquaintances have turned their noses up at hearing ‘Tribeâ€™ and ‘Pulseâ€™ mistaking the heady rush of sound as Slipknot being fed backwards into a gameboy. Unfortunately, my experience and knowledge of The Mad Capsule Markets extends only as far as the last 3 albums; 1999â€™s ‘OSC-DISâ€™, 2001â€™s ‘010â€™ and 2004â€™s ‘CiSTm K0nFLiqtâ€™ so I have very little knowledge of their previous 8 efforts, all of which were exclusive only to Japan. However, with the band currently residing in Hiatus Heights, this wasnâ€™t the endâ€Â¦

Hiroshi Kyono, The Mad Capsule Marketsâ€™ gruff-sounding vocalist had been working on a solo project. Stemming from his DJ sets in Japan, to a range of clothing heâ€™d created, called Wag Dug, as well as contributing music to the Death Note soundtrack, Kyono had been at work on his new ventureâ€Â¦Wagdug Futuristic Unity. This solo experiment, which features a plethora of guest musicians (Justice, Chino Moreno, DJ Sid, Shitdisco, DJ Starscream to name a few) led to Kyono releasing a mini album named ‘Nu Riotâ€™ in 2007. The full length, ‘Hakaiâ€™ in July 2008, then followed this.

Wagdug Futuristic Unity is a project that walks on a very thin tightrope. It totters and teeters with uncertainty, yet always manages to find its balance and escape the tortuous drop into the bottomless pit of ‘unlistenable chaosâ€™. Kyonoâ€™s liberal use of blasting synthesised noise saturates the Wagdug sound. Itâ€™s drenched in colossal thumping drumbeats, held together by the kind of grimy bass work last heard in the breakcore work of Dev/Null, Drumcorps and other assorted Cock Rock Disco acts. Some moments appear to be the noises made by an X-Wing as their engines power down, mixed with a cacophony of ear-raping grime that is reminiscent of a factory of gameboys being set on fire. Kyonoâ€™s vocals are similar to his MCM-days in places, but tip to the scale of ‘almost incomprehensibleâ€™ â€â€œ itâ€™s as if he was taught English in a wind tunnel by Danny Dyer shouting through a toilet roll. Of course, a lot of what is being screamed could very well (and most likely is) in Japanese!

Itâ€™s not all terrifying, eardrum destroying punk-rock breakcore though. ‘X-Stereoâ€™ is a reworking on ‘Waters of Nazarethâ€™ by French electro-oddballs Justice. Whilst it may at first just appear to be the original song with Kyonoâ€™s distorted, garbled rap placed over the top (hang onâ€Â¦it is just that!) thereâ€™s an element of a warped, feedback-drenched layer of fuzz created specially to contort the track through Wagdugâ€™s disturbing musical psyche.

‘Weapons of Wag Distortionâ€™ comes across as a Prodigy meets *insert name of popular rap-metal band from the 1990s* in some nightmarish, Soulfly-gone-techno mash up of clattering steel drums, deep synthesised rumblings and a swirling aura of reverberating dread.

Obviously The Mad Capsule Markets influence is going to force itâ€™s way through like the alien bursting out of Kaneâ€™s stomach. It does so to great effect on ‘Mad Saturatorâ€™, sounding similar to ‘Mob Trackâ€™ from the bandâ€™s ‘OSC-DISâ€™ release. The synthesised rise-and-fall swirls the track like a cement mixer constantly changing speed, whilst the clattering percussion and Kyonoâ€™s rapid fire delivery give the track a much needed metallic bite. ‘Got Lifeâ€™ also takes the MCM template a royally fucks it through a chaos dimension of spiralling noise-drenched mayhem â€â€œ Atari Teenage Riot would have been proud; fuck, if they were still going (properly) theyâ€™d probably demand Wagdug joins them on their next tour or at least organise some kind of collaboration that would no doubt destroy the fabric of reality.

‘WALLâ€™ featuring Chino ‘BACK TO SKOOOOOOOOOLâ€™ Moreno of Deftones is an unrelenting attack on the senses. Moreno and Kyonoâ€™s vocals meld into a deformation of unholy terror that would leave Mike Patton to remark: â€œthat isnâ€™t right you guys.â€Â Whilst this howling bloodlust takes place, the music delves into the realms of darkness, taking on an unsettling and sinister tone, encompassing droning synthesised washes that are bludgeoned to a gruesome pulp by the erratically destructive drum machine. The closest Wagdug gets to pure white noise.

Ever wondered what the sound of someone fucking a synthesiser would sound like? ‘Why?â€™ just about does that. The strange barking background sounds, which give the impression that this track was recorded inside a kennel, Amen-drum break splatters, alongside the abnormal and persistent pounding beat and pogo keyboard smashes are reminiscent of some sadistic rave that would cause a ‘clawing at the wallsâ€™-style mental breakdown.

‘Chaostic Radioâ€™ is the closest Wagdug gets to creating a song with a trace of a ‘popâ€™ element. The rolling keyboard lines are soon obliterated by the wave of pulsating crashes and snarling cymbal crashes. Thereâ€™s a nod towards ‘All The Time On Sunny Beachâ€™ in the way the chorus progresses, with itâ€™s jaunty, summer-tinged rise and fall.

This is probably the kind of music that induces seizures in lesser people. The intensity of Wagdugâ€™s sound is that of 100 of those coma-inducing, colour saturated techno-robot shows. Heck, Iâ€™ll wager that Kyono has lent his musical talents to soundtracking these kind of shows – and why not; his sound would fit them perfectly. In fact, ‘Systematic Peopleâ€™ is the soundtrack to an anime show called ‘Kurozukaâ€™, a series based on Japanese swordsman Minamoto no Yoshitsune.