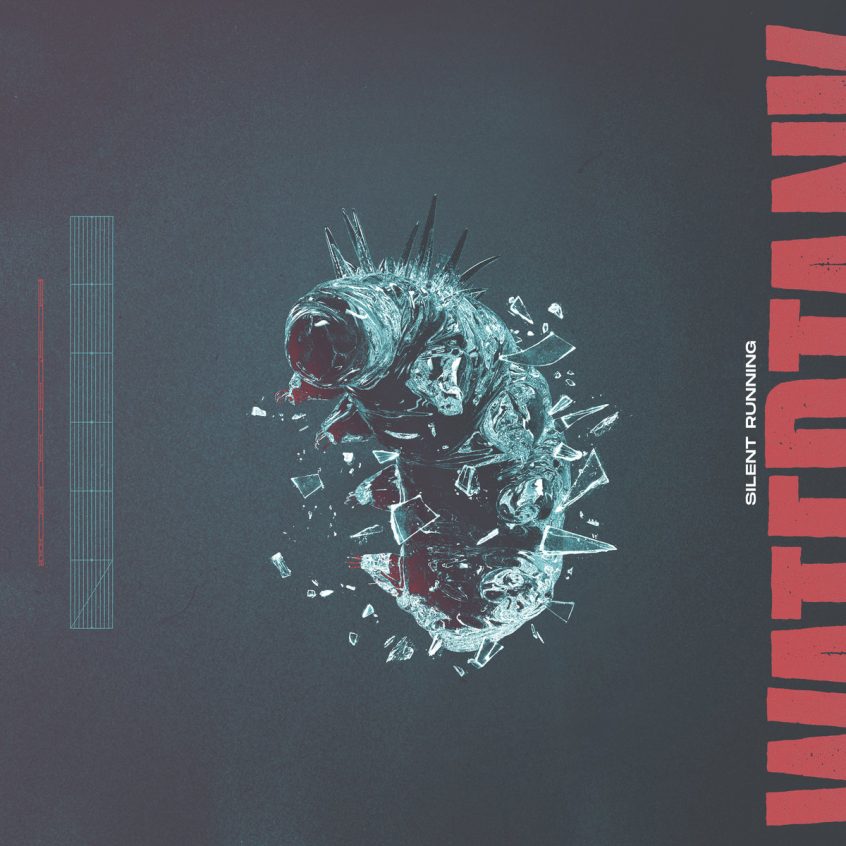 I first discovered Watertank through the tennis-tastic video for How Fast and it made a huge impression, by ticking that box and scratching that itch of wanting something that sounded like Torche‘s Hamonicraft enriched with elements of late 90s post-hardcore. Hello then to Silent Running, the 3rd album by France’s Watertank and, spoiler alert, it’s an absolutely fantastic record that will get under your skin. With personnel changes and line-up shifts, it seems Watertank have refined themselves as well as their sound; there’s a hell of a lot of depth in this, from moments of fragility on the enigmatic Timezone, with it’s fuzzy, indie-warmth to the uplifting joy of the gritty, crunching guitars and vibrant pop-rock of Beholders.

The weird, alien-noises and unearthly hum that pulsates in the first 25 seconds of opener Envision makes me stare at the creature on the cover of Silent Running far too much – whatever that thing is, it’s definitely made those noises and it wants to escape. Thank god then, that the track is this joyful, rock ‘n roll banger of spirited triumph, complete with some soaring backing vocal “woah-oh-oh-ohs“, precision drumming and a killer chorus.

Suffogaze has this wonderful crunching opening riff, that the band don’t overuse, shifting their sound almost immediately up a gear, delivering this bruising, reverberation of raucous, emotive hardcore only to slam back into that delightfully infectious riff at the start to bookend this punchy, 2-minute blast of energy.

There’s a strong shoegaze vibe on the fuzz-heavy title track, the guitars have a melancholy quality, see-sawing in and out of each other, whilst vocalist Thomas Boutet adopts this almost sorrowful, whispered tone, that’s buried beneath the swamp-like riffs, similar to that of Floor. The sample of Ben Stein’s lecture from Ferris Bueller’s Day Off somehow makes it into spirited, Dinosaur Pile-Up earnest-sounding rock of The Ejector Side, albeit distorted and mangled in places, perhaps showing the subtle decay caused by the alien creature on Silent Running‘s cover – who knows. It keeps with the feeling of that sci-fi element subtly sprinkled throughout and wonders if there is a nod towards the environmental post-apocalyptic film of the same name.

Spiritless is the upbeat post-punk track you didn’t know you needed in your life, channelling Walter Schreifels-moments of genius through the crunching chorus and that alt-metal slam that Watertank dive into with razor-sharp efficiency and delight.

It feels as if near the end of Silent Running, Watertank have stuffed some of their greatest work or at least, had the chance to be their most experimental – the oddball Thing Of The Past is a minute and a half of frantic, noisy, twisting punk rock that falls over itself in it’s urgency as it scrambles to finish, only to suddenly cut short, leaving you with this tape-loop, of scrawling, backwards-sounding noise of eerie keys that slowly fades into the final two tracks, that show the true strength of Watertank’s abilities.

Building World is 4 minutes of exquisite space-rock, the rumbling bass work, the brooding, background synths, the positive bounce of the guitars and they way frontman Thomas Boutet’s vocals hit those high notes, it gives a huge nod to German rockers Entropy and Pete Appleby of Renee Heartfelt.

The very best is saved until the end with Cryptobiosis, which is a stunning piece and I know why it’s at the end, but it’s something that really needs to be heard first. Think shimmering keyboards, this 80s-sounding soft-rock panache, soaring, Journey-esque melodies, some unexpected brass, and the build, god the build, is majestic, it’s world-beating, it’s furiously happy and vibrant, ending in this raucous squeal of a discordant saxophone- absolutely wonderful. It sounds like it fell off a John Hughes soundtrack written by Helmet trying to make yacht rock.

Watertank are the kind of band who will make your heart soar; with Silent Running they’ve built this collection of fuzzy, sun-tinged pop-rock, that draws heavily from the realms of shoegaze, 90s hard rock, 80s electro-pop and post-hardcore to make something that’s truly special, unique and wonderful. Whatever genre you like, I bet you will find something you absolutely love about Silent Running. A remarkable body of work delivered with gusto and warmth – fans of early Torche, Helmet, Microwave, Memorial and Renee Heartfelt should seriously make Watertank their new favourite band immediately.

Stream/download/buy/riff your face off with Silent Running by Watertank below!