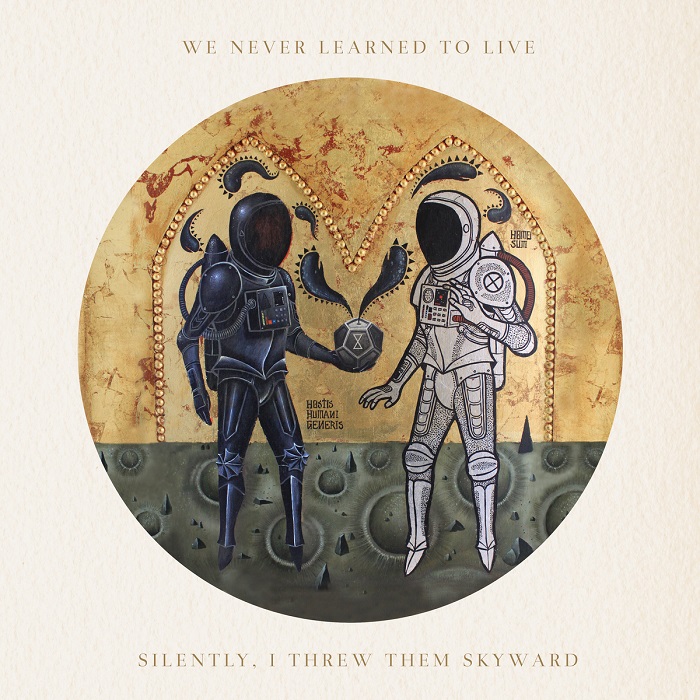 Band: We Never Learned To Live
Album: Silently, I Threw Them Skyward
Label: Holy Roar
Release date: 22 June
Sounds like: Crushed by the weight of the world.

Curling up into a ball and hoping it will all go away is the name of the game. Dour feeling-experimentalists We Never Learned To Live are that ever flickering, blue screen of death breakdown you were warned about but still you install the corruption without a thought, claiming “it won’t bother me, not one bit.” Yeah, good luck with that. This is their debut full length through Holy Roar, a label that this Brighton quintet really do fit with perfectly. Holy Roar are well known in the underground circles for their diverse acts, ranging from bands that create rabid-mouth frothing eye-gorging terror to those that sound like a mountain collapsing on a fireworks factory. So, having a band that splatter their bleeding, vein-encrusted hearts on their sleeves is going to fit in just fine (or as fine as We Never Learned To Live can be ‘fine’ because, they sounds as though everything is starting to burn up on impact).

Silently, I Threw Them Skyward is dragging me back to the days when this kind of post-hardcore morbidity mattered. This is a shot in the arm, or rather, it’s removing the helmet and kicking you out of the airlock, watching you gasp, spasm and clutch at your throat as decompression takes hold.The vocals switch from morose, lost mumblings to this brittle, gut-wrenching screech, that whilst might not be the strongest, it it laced with raw feeling and a sense of bleakness.  Opening track Shadows In Hibernation contains the saddening refrain “..and it seems like we’re destined, to drag each other down” which intertwines excellently with the downcast words “is it safe enough to breathe the air?” which implies that if you have to ask, it’s probably not safe. This dark and shifting opener of aggressive and suitably riff-heavy post-hardcore is jarring and damning and sets a somewhat delicate and fractured tone over the next 7 tracks.

The prog-rock build during the 6 and a half minute twist of Twitching With Every Apology staggers through some torturous and demanding moments and frankly, sounds huge under the space-rock pummelling and the harrowing screams, which burn with the intensity of Touché Amoré tearing themselves apart. Vesalius touches a raw, pulsating nerve – “I’ve been grinding my teeth again…” monotones vocalist Sean Mahon, before letting rip with another gutsy scream of defiance and crushing rage over the stark and callous energy that erupts forth. On Crystalline, So Serene wounds are ugly and visceral as WNLTL spill their cathartic and cleansing emotion through a wall of crushing power that reaches an uncomfortable and grating crescendo before dipping into a sombre and mournful conclusion.

It’s clear that emotions are highly fragile on Silently, I Threw Them Skyward – WNLTL channel their blighted and often poignant sound through moments of burning rage- see the more wrath-spitting moments on Fragmented Footnotes on Self-Diagnosis, which is boiling with bile and complexly serene when vocalist Mahon tones down his ragged screams. Stand-out track though is the frothing, atmospheric twist that is You Will Sleep Now, Yourko which is an emphatic release of burning frustration and the chilling descent into a breakdown. It’s spooky and utterly damming, with the element of the apocalypse happening in the background as this five piece forcibly exhaust themselves through this bruising, wail of feedback-drenched guitars, dismantling cymbal crashes and Mahon’s desolate gasps.

There’s a sense that We Never Learned To Live are dragging some enormous emotion weight around – the despair of being part of an ill-fated space mission? The thought of never returning? The fear of being picked off one by one? Who knows. As the epic, atmospheric 8 minute closer Tasting Paralysis seeps its way into your mind through monolithic passages of post-rock indulgence and Envy-style misery and rage; Silently, I Threw Them Skyward is a dynamic and dark concept of musical frailty and churning passion.