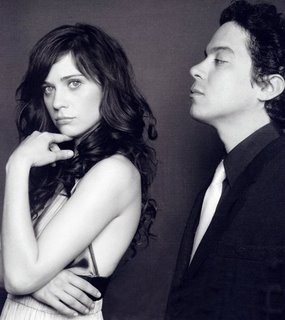 She & Him are Portland singer-songwriter M.Ward and actress Zooey Deschanel (her from The Hitch Hikers Guide To The Galaxy, Elf, Almost Famous and many others.) What intrigues me about this project is the fact that Iâ€™d not normally be sucked in to listening to such gorgeous sounding indie rock this easily, but after seeing a video of their performance on some American late night talk show, (I forget what it was called, and youtube is being about as helpful as a paper frying pan) I was hooked. There’s no denying that Miss Deschanel does indeed have a beautiful voice. Compared to the warblings I’ve heard from Scarlett Johansson (yet another movie star attempting to make the transition between actor and recording artist) She & Him have nothing to worry about as regards the superior act – they win hands down. At times, Zooey sounds like she’s auditioning for Grease (no, come back!) – this may well be considered a criticism; far from it – her transition from the 60’s surf/rock ‘n roll swing of both ‘I Was Made For You‘ and ‘Change is Hard’ through to the 90’s indie of ‘This Is Not A Test’ and the velvet tones of ‘Sentimental Heart’ show off her impressive range and wonderful harmonies. Of course, M.Ward should also receive praise for his delicate and intricate composition, especially his impressive guitar work on ‘Why Do Let Me Stay Here?‘ which despite it’s overtly indie tones, reminds me of The Beach Boys and literally drips with a thick summer sheen.

She & Him’s debut album entitled ‘Volume 1’ will be released in the UK on the 14th July via Merge records. For those in America, the duo (featuring a backing band composed of the cream of the indie-rock scene; i.e. I don’t know, so check their Myspace) will be touring from the 23rd of July to the 10th of August.

She & Him Official Site
She & Him Myspace
Label Site
M.Ward Myspace