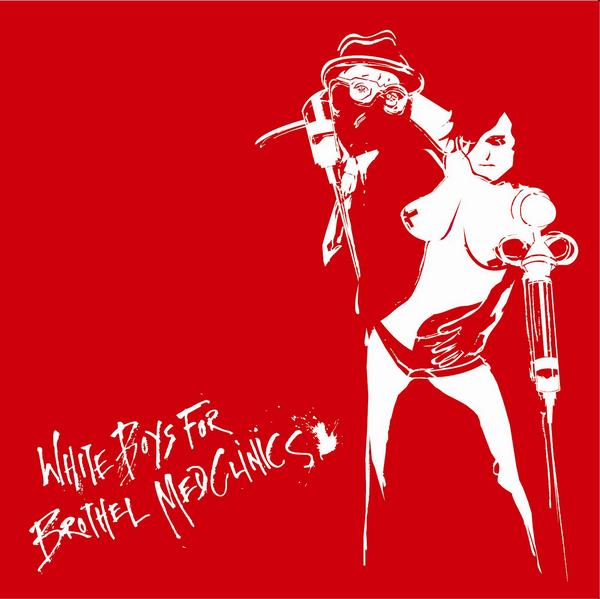 Come on, you canâ€™t tell me that a small smile didnâ€™t flicker across your stone-cold face at the sight of this band name. Itâ€™s nice to hear something thatâ€™s obvious incredibly tongue in cheek, but also quite grim and perverted at the same time. Following along the similar lines as hardcore homo-boys, Gay For Johnny Depp, White Boys For Gay Jesus are a lot less subtle. Instead of convoluted song titles regarding sticking your finger in someoneâ€™s arse, or outing Paul Stanley, WBFGJ go straight for the throat with titles such as ‘Pussy Cakeâ€™ and ‘File To Fuck.â€™ Also similar to the New York Jack Sparrow lovers, their vocalist remains wholly indistinguishable as he splutters, shouts and drunkenly roars quick-fire blasts of eager musings over the bandâ€™s own brand of mangled electro-tinged hardcore. I donâ€™t mean electro in the Enter Shikari way of someone listening to a 4th-rate metalcore band on myspace, only realising theyâ€™ve left their itunes on and itâ€™s mixed it with a Ministry of Sound compilation. Oh no, itâ€™s the delicate touches of synthesised breaks and Alias-style passages that lend a certain ambience and texture to the recordings. The key to this is not to overdo it; keep it subtle and use it sparingly, which the White Boys do.

White Boys For Gay Jesus are an interesting prospect though. Whilst their sound show some elements of standard metallic-hardcore, thereâ€™s a certain amount of charm and witticism is the recordings that make them stand out from the crowd. Mostly these are down to the song titles, which dip into new territories of ‘lowâ€™ but keep up with their persona of being an amusing and genuinely fun sounding band. Nowadays, musicians are far too serious; standing around looking moody in a graveyard, wearing the same black metal shirt with cut off sleeves, banging on about being defeated and rising from the ashes â€â€œ seriously dull. What we need is songs like ‘Gang Ape Sex Tapeâ€™; which treads on similar ground to Every Time I Die (back when they werenâ€™t all Southern-raawwwwk); incorporating tongue-twisting vocal patters, jerking, off-kilter guitar lines and rumbling bass grooves. In places it twists and revolts like a Converge track put through a mixer, only with cleaner but equally unstable vocals, which dip from standard razor-sharp screams, to classic metal wails.

‘Pussy Cakeâ€™ takes the ideas exhibited in ‘Gang Ape Sex Tapeâ€™ and expands upon them, utilising the singerâ€™s bark-like vocal technique with the stop-start sound of the guitars and the kind of verse that wouldnâ€™t look out of place on Dillinger Escape Planâ€™s ‘Ire Works.â€™ Whatâ€™s impressive about WBFGJâ€™s sound is the way they cram so much into their 2-3 minute blasts of raw power. In that respect, they remind me of The Locust, but with a longer attention-span, choosing to spend more time on certain passages â€â€œ shaping and moulding them into something that sticks in your mind, rather than rushing through them in 2 seconds like the roadrunner with attention deficit disorder.

‘Naked Lunchâ€™ takes a different direction, starting off with a fuzzed-out, distorted piece of near-incomprehensible speech (â€œdown into the firesâ€Â¦.and something about gangsters is all I can make out); which is then joined by a dream-like passage of methodical drumbeats, jagged guitars and sinister glitch-filled scratching, that builds and builds into the next track, ‘Rot Knocker.â€™ Hereâ€™s where things take another turn, as the scratching continues, The Prodigy seem to take control for 10 seconds, adding their traditional ‘it sounds like a warped siren getting louderâ€™ noise, which blends beautifully with now turbulent beats erratic metal slap of the trackâ€™s main body. The most savage offering however is the caustic thrash of ‘File To Fuckâ€™ which mixes Botch-like bass grooves, blood-curdling roars and grindcore-worthy drumming, that comes in fits and bursts like a touretteâ€™s suffer during a particularly violent attack. The erratic urgency of the song’s beginning is slowly taken apart piece by piece and replaced with such a bizarre and almost DEP-metal mid-section that utilises the bandâ€™s sampling technique in an important, yet scatter-brained way. The last minute or so offers several crushing breakdowns alongside the fearsome growls that builds and builds, before trailing off in a clatter of ear-rattling cymbal smashes and screeching guitar feedback.

‘Womb‘ is yet another stark change of pace for the White Boys crew. It’s a soothing, 4 minute haze of gentle instrumental wash that wouldnâ€™t look out of place soundtracking some pretentious foreign arthouse flick. Even the rambling, muffled speech at the start, which sounds like it was recorded in a church underwater fits into this analogy. It is however, an enveloping, somber drone that ends this EP in quite a gentle, yet bleak way.

For fans of disastercore experts Down I Go, the ball-breaking rumblings of Botch, the schizophrenic metal barrage of Dillinger Escape Plan and a fair slap of bawdy humour. White Boys For Gay Jesus hit a clear home-run for UK metal, fantastic work – go buy the EP right now.