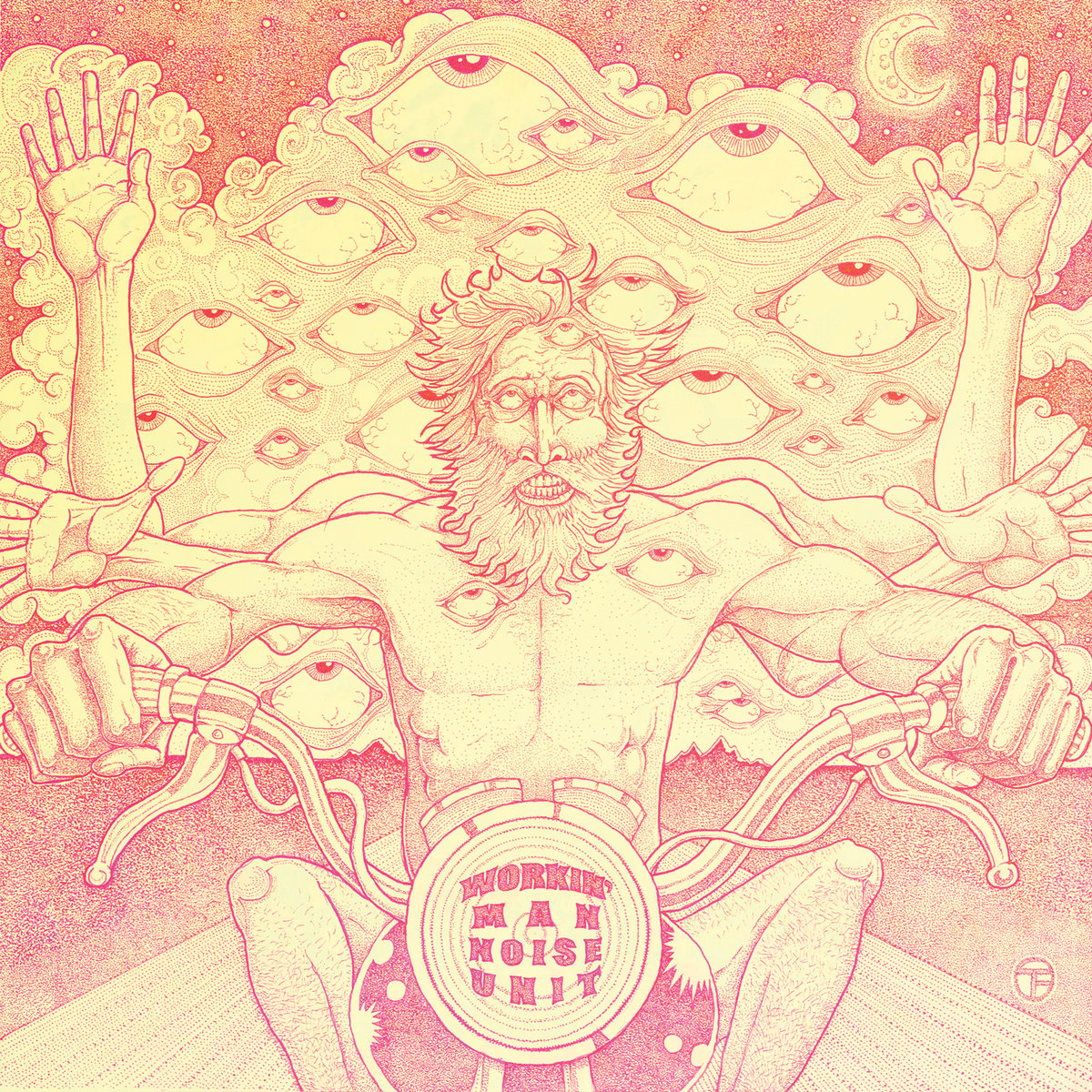 With the kind of mystic aura that would take out a herd of Tyrannosaurus Rex’s just by lifting one armpit and uttering an almighty belch, Workin’ Man Noise Unit are a stagnant, crunching wagon of topless, maddening energy and scene-bating destruction. This Reading four-piece have been kicking around for a while now, releasing a string of cassettes (punk as fuck) and churning out an unholy concoction of six-string-damaging face-smashers under a maelstrom of relentless enthusiasm.

One thing you will notice on Play Loud, is the production values have been tweaked. Make no mistake, this is still raw, but the blood that splattered from the gnashing teeth on their debut Drinkin’ Stella To Make Music to Drink Stella to has been mopped up in places and replaced with the sound of a pulverising drive from the rhythm section, guaranteed to blast away the cobwebs and devastate eardrums. The thing about Play Loud is, it hits fucking hard. There’s no messing around here – I mean, the album cover is a multi-armed semi-naked man driving a motorcycle down a freeway, with a huge shitting great eye-cloud monster chasing him. It paints an accurate picture of what Play Loud is…some mesmeric eldritch abomination pursuing you – making an unholy racket and having tremendous fun.

As the swirling twist of noise filters through on opening track, With Love Supreme – you know this is going to be a stormer. Scratching electronic bleats and squeals gurgle away in the background as the slovenly, drunken rock ‘n roll stampede bludgeons its way forward. There’s a cheeky, filthy swagger to these lurching, fuzz-drenched riffs that sit nicely with the brutal, METZ-style drumbeats. Where Fu Manchu sang about sand dunes, hot ladies and shift-kicking, Workin’ Man Noise Unit sing about gunning it down Reading’s Inner Distribution Road on the balls-out smackdown of Cruisin’ The IDR.  “You wanna go for a ride?” belches guitarist Sam Clarke, on this fist-pumping riot of garage-punk gargle that sounds utterly triumphant and savage to boot.

Speaking of savage, strap yourself in for Icegrill 420 as it will eject you through the windscreen and skid you down the IDR like a dead bloated bug. This is blues-punk rock, drenched in feedback and howling noise and it slams past with nerve-wrecking speed. “We got nothing to say, but we’ll say it anyway” shouts Clarke, his ragged Fugazi-esque rasp just as raw as the righteous racket he and the rest of WMNU are strangling out of 2 and a half minute fun anthem of righteous destruction. The dirty squeal of Creepin’ Around is a dark, brooding slither of noxious fuzz that allows you to regain some of your senses, as it slovenly stamps through in two minutes of sludge-rock debauchery. There’s no escaping the unrelenting rhythmic pound of Yeah, I Was Hypnotised, which leaps out of the speakers with joyful zest and the kind of grunge-punk energy  and battlefield stomp of the previously mentioned METZ. The last half gets progressively more warped as full meltdown mode is engaged and it descends into a scrambled punch of Floor-noise-metal coated in a sticky residue of grime and is viciously caustic.

The eerie bass creep of Black Lights mixes an almost melodic path with the harrowing squeals and noise provided by samples/electronics man, Jamie Hobley, whilst his (and possibly Clarke’s) vocals are fed through a distorted microphone that’s been buried in the dirt. The drugged-out psychedelic picture it paints is oddly comforting and makes you feel as though everything is moving in slow motion. This makes way nicely for the bone-cruncher that is Smoke Like Hell, a blast of blues-rock ‘n roll shred of primal power, coated in beer, sweat, weed and strongly reminds me of the excellent Red Fang.

Hate It, slow-jams through one epic, self-inflicted hangover, laced with skunk and darkness and disappointment, whilst the dual vocals of Clarke and Hobley meld into a hydra of overlapping shouts and guttural cries of indignation. As Jammer sinks its teeth in – all blood-dripping meaty riffs, howling shrieks and wailing circuit-board glitches it rounds off the raucous and ridiculous slam dunk that is Play Loud.

There’s nine reasons why you need to pollute your ears with Play Loud and I’ve just described them all to you. Buy it now.