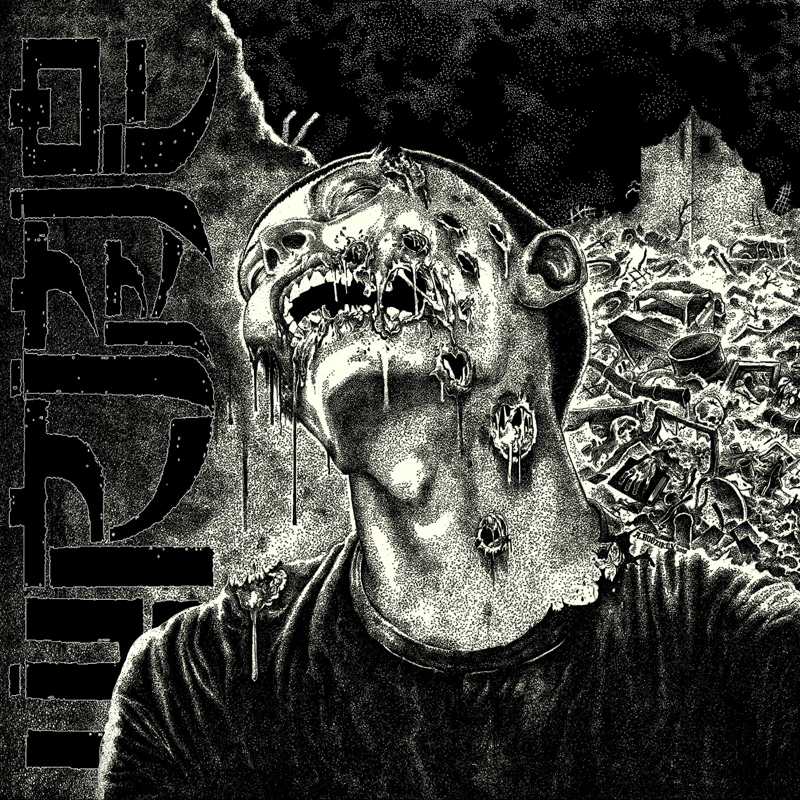 There must be something in my mind that makes grindcore so hilarious. The sound of a man gargling paint thinner over filthy guitar riffs and drumming that sounds like someone knocking over a pile of pots and pans is automatically the funniest sound ever. Of course, it can also be the most brutal and Wormrot do just that.

Straight out of Singapore, Wormrot are a 3 piece (drums, vocals and guitar respectively, fuck bass players dude), and are absolutely insane. I had to check to see if they had a drum machine, but was impressed to see that an actual human plays at the break-neck speed that the band only seem to be able to run at. ‘Dirge‘ is their second album, and condenses 25 tracks into 18 minutes. Now, that’s fast kids – that’s like the Flash and Superman starting a power-violence band. Wormrot are crazy awesome though; stuck in the one gear of course, the gear labelled ‘this is the part where your bones shatter into pieces on impact.’ The vocals range from insane mental-patient howls, to snappy, rabid yelps, to hardcore-punk gruff shouts and then some standard screaming and then back to the psychotic mind growls. The drumming consists of a blast-beat intensity and blister-induced savagery, whilst the guitar work shifts from groove-metal (see Deceased Occupation) to a thundering thrash attack (Waste of Time). What is interesting, is the way Wormrot sound so deliciously scrappy, yet there seems to be this invisible barrier encompassing their music, that tightens then slackens then tightens some more, every time their sound drifts into a near incomprehensible scourge.

Spot A Pathetic mixes harsh black metal thrash with snotty hardcore punk tomfoolery; as does Principle of Puppetwarfare, which mixes that stocky 80s punk attitude with a swagger of 90s dumb-meathead fist swing. Butt Krieg is Showing is sonic-blast beat dementia fed through filthy mesh of crust-metal chaos. The vocals on Ferocious Bombardment are akin to that of the wailing and gnashing of some kind of starving demon spawn; a fitting and rather apt title methinks. Stench of Ignorance is what Minor Threat would sound like if they’d spent more time drinking and listening to more grindcore and spent less time being straight edge. There’s a nice tribute to Napalm Death about halfway through Dirge in the form of You Suffer But Why Is It My Problem? At 5 seconds, it’s five times the length of the seminal grindcore masterpiece, but is a nice touch and one that the ‘Death boys would no doubt find amusing. Back Stabber Mission Aborted splices growled black metal cries, with an almost Hatebreed dual-vocal bark and scrappy, thrash-metal guitar licks and that same relentless percussion that is pure savagery spliced with discordant thunder. The Final Insult is the only track that feels like it wasn’t recorded after about 10 buckets of coffee ice cream, washed down with a pint of whisky. It’s a riff-driven stagger of chugging alt-metal that adjusts from a hardcore head-banging jerk to an almost tribal slog of progressive rock inside 109 seconds; making it also the longest track on the album.

Dirge is under 20 minutes of pure savage ferocity; that tears and shreds at your senses like a banshee controlling the drum kit from hell. Blister-inducing, chaotic grindcore done with such wide-eyed intensity and precision, it’s hard not to be impressed – complete air-punch brutality; all hail the rise of the worm.