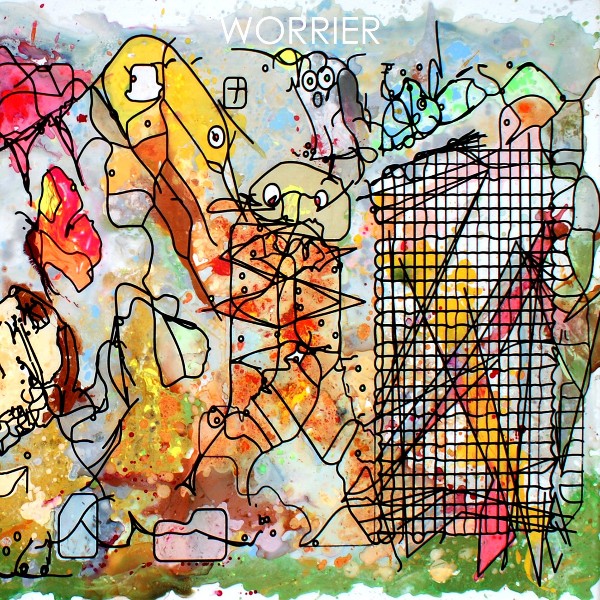 Worrier seems a suitably apt name for this trio from Milwaukee (you were expecting me to say Dublin, right?), as the vocals have a degree of panic about them. This isnâ€™t the kind of fright or anxiety you would associate with some weak-willed simpleton shuddering in the corner; this is the kind of intense, manic-staring panic of unhinged madness and scattered logic. The yelping cries and bird-like squawks of trepidation are juxtaposed with the flourishing, extravagant nature of Worrierâ€™s eclectic sound.

Thereâ€™s a kind of breathless exuberance in their music – not in the minute long feral power of say bands like Some Girls, because Worrier actually have tunes and melody. What I mean is, thereâ€™s this kind of intense and euphoric aggression present. Many of the tracks on ‘Source Errors Spellsâ€™ are staggering over each other in a glorious stumble of miscellaneous sounds. Thereâ€™s so much earnest creativity on offer and the alarmingly different shifts in sound, speed, pattern and focus draw several deserving comparisons; such as the oddball eccentricity of Liars and that outrageous passion of Les Savy Fav.

Worrier open proceedings with ‘Let Down Your Hairâ€™; a track that begins with the moody hum of a church organ, backed by a soft fuzz. The drums kick in along a wavering pattern â€â€œ rolling and bouncing alongside the heavily synthesised layer of sound. The dual vocal attack folds into itself, mixing a chanting lead in with the soaring backing cries and shouts like a cluster of rowdy drunken teenagers. But thereâ€™s a delicate craft in this â€â€œ whilst it predominantly sounds like a raucous sing-along reserved for the kind of places where youâ€™re likely to get half a bottle embedded in the back of your head; the melodic pop-hooks balance out the chattering hustle. ‘I Am The Riverâ€™ follows, driven predominantly by the militant electro-drum beat, that is devoid of cymbal crashes and instead centres on an almost tribal thump of relentless energy. The guitars and keys are a lot more subtle this time, giving way to breathless vocals and purring atmospheric hum.

The vocals are going to be the marmite on this particularly fine cake of musical notes however. They range from this gasping, almost husky drawl; especially ‘I Am The Riverâ€™ but also a odd rising vocal shriek that isnâ€™t too dissimilar to Jaguar Loveâ€™s Johnny Whitney. You know; the kind of singing voice that makes you think the personâ€™s testicles have started to retract back up inside them. However, itâ€™s these vocal swings that make Worrier an appealing prospect, something that is best emphasised on ‘Reverse the Hearseâ€™ which captures the squawking shrillness and the wheezing calm so well.

‘Sea Sectionâ€™ takes the sturdy drumming of ‘I Am The Riverâ€™ and collides it with eerie bleeps and screeching synthesisers in a similar way to Liars, if they started writing songs about boating trips whilst mashing the keys of a Yamaha. The vocals are notably different again, taking on a more rough-shod punk sneer of indifference and lyrically seem quite headstrong and ring with defiance. It also references the need to escape, with the emphasis of being free from various shackles. The words “and weâ€™ll sail away in a casket made of clay, to melt down right before your eyesâ€Â supports this with a nod towards regeneration. ‘Lost Shipsâ€™ keeps with the aquatic theme, blending heavy, spiraling electronic influences with a distinct dance-rock frame and the crashing wave of glitching squeaks and roars. ‘Iâ€™m Not The Oceanâ€™ is a brash retort to ‘I Am The Riverâ€™; the cry of â€œthese are blackened ships!â€Â and the trippy, dilapidated quiver of the guitar and drums, coupled with the intensity of the severe vocals is what Worrier pull off extremely well.

‘Black Death Princessâ€™ sounds like Neon Blonde and Rutger ‘Aboutâ€™ Hoedemaekers jamming in a studio after too much caffeine. Talk about menacing – the Neanderthal drumming, creepy, yet swirling keys, dark pulsating loops and the hauntingly hoarse backing vocal screams and a rich warm lead voice that wails with an eerie sinister lust make this an obvious album highlight. ‘Wind in the Sailsâ€™ is a big smug grin of tooth-rotting indie pop that many will find not to sing along to by the second listen. Infectiously warm and soothing, with strong prominence on anthemic gang vocals and buzzsaw keyboard lines through the jaunty, summery buzz of twinkling noise. ‘Axeidentsâ€™ sounds eerily similar to the massively hyped Test Icicles with Tim Harrington-aping vocal barking about fist fights over the top of bouncing dance punk that sparkles like itâ€™s been waxed clean by Superman.

‘Source Error Spellsâ€™ by Worrier is a splendid piece of eccentric, indie-dance-rock; itâ€™s schizophrenic nature, both musically and vocally is somewhat jarring at first, but one that open-minded listeners, particularly those who follow Why? Liars and Jaguar Love will find rewarding and full of vibrant energy.

Those looking for a copy of ‘Source Errors Spells’ can download a copy for a mere 5 euros (just under 5 quid) from their bandcamp site.