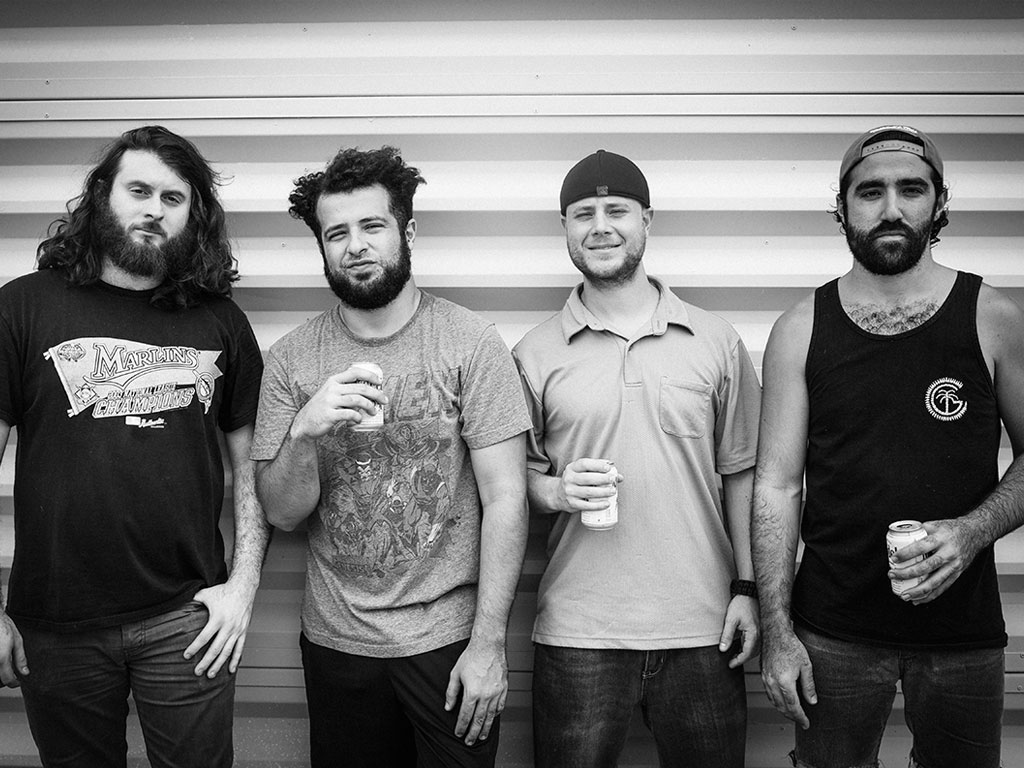 *Crushes beer can into head* Let’s get Neanderthal! Wrong are from Miami and are interested in riffs, riffs and more riffs. Made up of ex-members of Kylesa and sludge-pop titans Torche, Wrong are channelling the sweaty, bleary eyed, disgruntled, yet still party-animal instinct of early Kvelertak, alongside the down-tuned hum of Unsane and that snarl of Helmet. Got that? Good. There’s depth here though; under the mountains of crushed cans, rusty guitar strings and empty pizza boxes, Wrong crowbar in enough variation and disgruntled destruction into these 11 tracks to make you stand up and notice them.

More Like rips past in a brief 76 seconds, a stop-start rhythmic pummel that swaggers with an almost cock-rock, tongue-between-two-fingers slab of sleaze, ending in a crunching mulch of noise. This is followed by the wall-of-death pandemonium of Turn In, which thunders past like a mid-90s bro-core mob of meat-heads, that quickly switches to those ever-so-meaty guitars, which drip with blood like a particularly rare slab of dead cow. You can feel the guitar strings sink in; that crunchy, razor’s edge, alongside a ridiculously out of place solo (on the more hardcore-punk bits) as it reaches the howling, savage conclusion.

Next track, Read…Erase can’t wait to finish. Seriously, it walks into the room, takes one look at the absolute state of it, adjusts a painting and fucks off. “There’s always no sound – you know I don’t read” snarls vocalist Eric Hernandez, as he proceeds to chant the words “READ! READ! READ!” in an attempt to hammer home the illiteracy of his persona on this bubbling roar of mashed-up thrash-hardcore. What Wrong constitute as melody is nicely shoe-horned into the grunge-punk assault of Entourage; Hernandez’s vocals are delivered in an almost robotic chant, under the ramshackle thunder of Mastodon-lite guitar and drums, only letting rip on the chorus with his scratching roar.

Hum Drum returns to the world of flexing your swans, big beards and skateboarding off ramps into bushes that are on fire. This is pure mosh-core bass-driven sludge that’s all high-fives, stage-dives and shredding six-strings fed through the meat grinder. Mucilage lurches and rolls like a boat on the high-seas, the shrill, discordant wail of the guitars alongside the boiling curl of the rhythm section melding together nicely into a stoner-metal belch.

The see-sawing rolling strut of Fake Brain, falls somewhere between the muscular flex of mid-90s noise-hardcore and the spiky, vitriolic blast of KEN Mode, with the last minute tumbling down a rabid rabbit hole of overlapping riffs, flailing limbs and howling noise-rock dementia. There’s more unease on the lurching power of the roundhouse punch of Boil and the expansive, bludgeoning caterwaul created by the title track. Wrong round things off with the dream-like wash of High Chair, making no bones about burying their noise-rock scrawl in acres of swirling feedback and an almost shoegaze-hum of heavy-grunge, similar to that of label mates Nothing and it sounds utterly fantastic, thoughtful and creepy to boot.

Crack open 10 beers and rid yourself of all your rights and listen to Wrong by Wrong below. It’s party time.