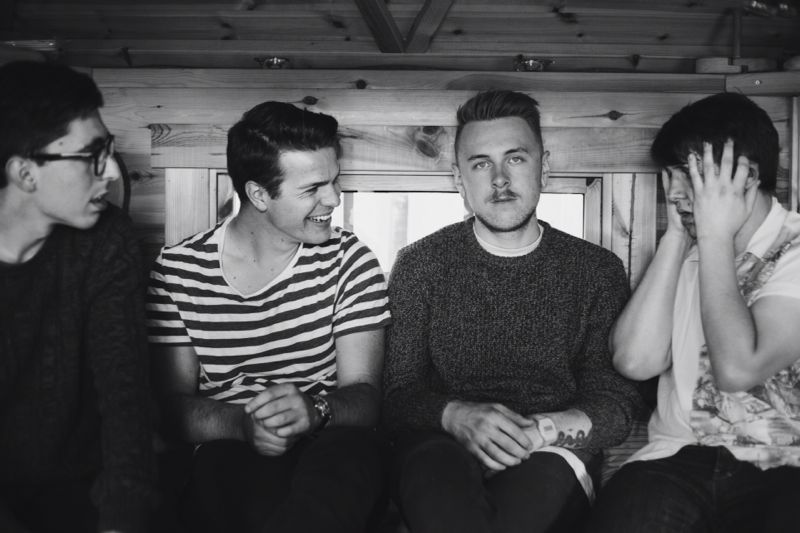 Band – Yearbook
EP – Old Bones
Release date – 5th March
Sounds like – chunks of rock genresÂ put into a blender and strained through your mums pants into a pint glass.

There was a cool fade in intro, then two chords into this EP I went ‘oh yeh alternative-emo-rock like that other song of theirs I could be anyoneÂ (no bad thing)’ Â then the third chord came and shat on that hypothesis. It was discordant but not that heavy, what it really reminded me of was InMe, remember them?

Whether intentional or not I found this band very difficult to place. They were described as a ‘post-rock quartet’ by their management but this don’t sound like no post-rock I’ve ever heard!

With UK bands, the lines between indie and heavier alternative music genres Â has been fairly clearly defined. Even if this isn’t achieved by the music itself the sub-cultures always felt quite disparate. The advocates of the two sides have often ignored any similarities in order to fight one another for the next request in the ear of the rock club DJ. This record seems to fly in the face of those divisions.

When the vocals came, they were loud in the mix, like a pop song and when the second track starts, in isolation it wouldn’t be out of place on a Razorlight album.

The chord progression in the third song We are Strangers could be Millencolin, and there is a note of Jimmy Eat World about the chorus.

By track four Classic Literature I was waiting for something weird and yet I still got a curve ball in my face; a grungy tribute to the nineties.

From this point on I caught the thread running through: this schizophrenic EP is dominated by the personality of those first three chords, the sound of post grundge; Foo Fighters, Silverchair that sort of thing.

But now I’ve satisfied that irritating part of me that has to categorise things. Who gives a shit what it is genre wise, is it any good? Yes, in a word.

The bass is nice and loud and there is a well polished ambient sound to the tracks. From the videos I’ve seen of the production of the record on their tumblr, they had some fricking sweet kit Â to work with and a lot of fun making this.

Might as well tell you about the last two tracks now.

Time management – reminds me of some of the more recent Coheed and Cambria sort of girly high-pitched backing vocals and soaring lead guitars. This in turn is a nod to an older school of rock.

When it gets going Sinker is like a Brand New song in subject matter and sound (from the Deja entendu times).

There’s a load of youthful energy crammed into this album. And probably in the same way that the first Brand New album sounds totally different to their more recent material, I think the eclectic mix on this EP shows a band in development. There is something more unpredictable and exciting about a record like that, sometimes I had to stop and rewind a section because my mind was like ‘did that really just happen?’.

It’ll be interesting to see what direction this band take next, but I’ve got a feeling that wherever it is it’ll sound damn good.

We got a sneak preview, but it’s out for a listen on Soundcloud now, or you can get merch and downloads on their website:Â http://yespleaseyearbook.com/