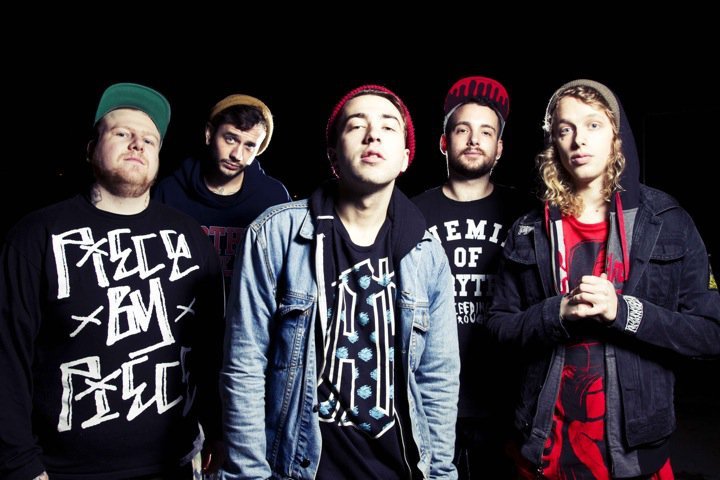 So….I guess some news or something? Baseball-cap wearing jokers Your Demise keep on truckin’ it seems. ‘The Golden Age‘ only came out last year (March) but they’ve already been back in the studio and are ready to chuck out some more noisy, hardcore punk shenanigans. The ‘Cold Chillin‘ EP (featuring artwork of a Monkey Pope) is released through Impericon (a website my computer hates) and the underground label, Pinky Swear Records on February 7th.

‘Karma‘ is the first track to see the light of day (released free here) and the Your Demise boys have even made a humorously violent mock-movie video for it that looks like a cross between the opening scenes of Dog Soldiers meets that Danny Dyer film set in the woods where loads of people get fucked up.

Your Demise seem to be channelling some feral, Jamie Jasta style hardcore on ‘Karma’ and it works to great effect. The guitars are taunt, with a slight southern-groove. The vocals are snarling and spitting and it burns with agitation and fury. In hardcore circles, it’s perhaps nothing you haven’t heard before – but Your Demise do it with such confidence and a kind of blunt, caustic charm, you can’t help but feel they’re doing something right – plus, their live shows are probably a blast.

Get yo’ pre-order on here. Chances are Fights and Fires can tell you the difference between a D6 and D20 and know the new citadel miniature paint range off by heart. With all four members sporting different variations of facial hair (nice!) they combat their obvious nerdy look by being a damn fine output for rock and or roll. I’m probably taring them with a geek brush because secretly, I wish I was in a band that sound as half as fantastic as they do.

In 2011 they released the album ‘Proof That Ghosts Exist‘ and I reviewed one of the tracks off of it on a rock sound comp here (listening back, it’s still an absolute belter). Well, it’s 2013 now and their second album is about to drop entitled ‘We Could All Be Dead Tomorrow‘ on March 4th through Swedish label Blackstar Foundation.

They’ve even gone and made a video for ‘Chase The Blues Away‘, which could well be your new earworm for the next few months at least. Coming across as a more raucous version of The Royal Republic, mixed with Blowgoat (if they cleaned up their riffs – never going to happen) – Fights and Fires make swaggering, cock-sure rock ‘n roll punk. ‘Chase The Blues Away‘ encourages you to embrace music as much as possible and you feel that Fights and Fires really do mean every word of what they’re saying. Attention Slam Dunk promoters, this is the band you really need to get on your bill, because their fun-time pop-hardcore is an adrenalin shot of beer-hair and mosh-pit goodness.

You can stream the album on bandcamp here and even pre-order it or get yourself a physical download for 6 quid! Top stuff.