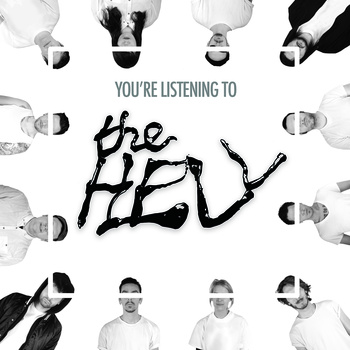 Band – THE HELL
Album – You’re Listening To THE HELL
Label – None
Release date – Out now via bandcamp (name your price download, bitches)
Sounds like – The Motherfucking HELL, YOU DICK

I’ve never seen a buzzard in the fucking moon…and nor have you.

‘Furious’ is one word I would use to describe this suitably chaotic offering from THE HELL (not to be confused with the HELL, a band featuring Matt Skiba and Atom Willard). Apparently a supergroup, featuring UK punk rock and hardcore’s finest, although I’ve only managed to research members of Gallows and Lower Than Atlantis being amongst THE HELL’s tribe, but I’m sure there’s more lurking from the elite of three-chords, high-fives and stage-dives.

You’re Listening To THE HELL sounds like a fun album – fun to record, produce, even be a minor part of, whether it’s backing vocal screams, featuring in the random expletive-laden skits in between or perhaps getting the tea to soothe those red-raw throats. There’s a real sense of bro-unity amongst the bludgeoning beatdowns and downtuned guitars, which sound so sickeningly contorted, especially as each riff gets more and more wrought on the album opener amidst chants of “LOWER! LOWER!” before being told to “GET FUCKED!”

THE HELL deliver windmilling, two-step, brutality and it’s utterly hateful, barbaric and oddly hilarious all at once..

The thunderous caterwaul of Step It Up, is utterly bludgeoning – especially the drums, which sound like a thunderstorm of brutality, whilst the guitars fall somewhere between a sludge-rock version of Of Legends-meets- Limp Bizkit, amidst multiple death-metal and hardcore screams – it’s utter chaos. It’s also difficult to judge how serious this is; whether we’re mocking the jock-hardcore scene, or celebrating it – either way, it’s glorious in execution. Word Is Out hammers home Hatebreed-style arm-spinning hardcore with all the grace and tact of a bull firing a grenade launcher into a china shop. It’s bloody, broken and breathless – just like your first experience in the wall of death.

“YOU WILL NEVER KNOW HOW MUCH YOU FUCKING DISGUST ME!” is spat with just venom, just utter contempt on the brilliantly savage hardcore stamp ofÂ  Shit Just Got Real – it brings to mind the savagery of Carson Slovak’s Century and the chant ofÂ  “we’ve got no tricks, No sleeves, no sticks, no seeds, no auto-tune, no keys, four strings and two leads” feels like downset covering Dog Eat Dog’s No Fronts. Also, mad props to the lead vocals at the beginning of this, which are an almost inhuman feral snarl of demented pain. Band anthem It’s the motherfucking HELL you dick is snapping, screeched hardcore and follows a similar power-violence pathway of crushing drumbeats and wall of serrated guitar shredding.

The tongue-in-cheek, rap-rock aping, detuned nu-metal dumbness of These Butters Bitches is fairly harsh if you don’t take it with a pinch of salt, but the cheerleader backing vocal chants, are an excellent addition to a song that I hope is mocking everything metalcore-twatpipes Attila have ever released and even if they’re not, THE HELL still do it with more style, flair, damage, control, aggression and humour.

Milton Keynes, your mum, your dad and your (“stupid fucking“) gran aren’t safe from the abrasive onslaught of I’ve Never Seen A Jackal on the 142, which is a joke calling out to all UK bands who think they sound southern rock (“phony cowboy scum“) without having actually left Buckinghamshire.

Hardcore Genocide ramps up the wrought, convulsing guitars, with some Emmure-aping rage and a revolving door of vocalists muscling their way in to scream their two-pence worth of filthy, scrambled vitriol.

There’s more that can be said, but I feel I would be repeating things – but to put it simply, if you’re after something with proper tunes, insightful lyrics and songs from the heart, you’re in the wrong place. THE HELL deliver windmilling, two-step, sweary brutality and it’s utterly hateful, barbaric and oddly hilarious all at once.

This shit’s about having fun – always has been.