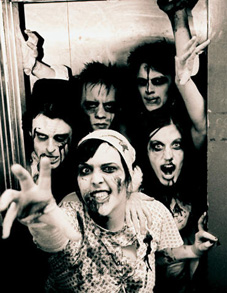 Just as Keep It Fast had all but cleaned up that last piece of pumpkin and horrible scared mess from the floor, we got a late ghoulish interview entry to scare the pants off of us!

However it doesn’t matter what time of year it is for Liverpool horror-rock 5 piece Zombina and the Skeletones, they are always in the mood for terror!

Covered in blood and dressed to the eyeballs in rotten flesh, they are deeply independent, refusing offers from many major labels. They have influenced a “horror punk” movement in the Liverpool area but they remain the kings so far!

Supporting the likes of The Misfits, Wednesday 13 and the mighty GWAR, they are nothing to be sniffed at! No Sir!

Zombina and the Skeletones have recently been touring all around the country and even fronted a zombie prom! But as they are such nice people they still have enough time to talk to us about the Wolf Man and the end of the world:

1) If you had to perform at an all groaning zombie nightclub, how would you get their bodies swinging?

Spit some blood, peel off a little skin here ‘n there. Not much different from our normal shows!

2) If the band could pick a song to be murdered to in a horror flick, what would it be?

That’s an amazing question! It would have to be New Orleans Incident! That’s one of our songs that covers that very event, well, more or less!

3) If you could play any spooky venue from the silver screen, where would it be?

The vampire gang’s hangout in The Lost Boys, or on the staircase at The Munsters place!

4) Do you have any favourite lyrics from ZATS that could get a B-movie scream queen started?

5) If you could have any one universal studios monster to be a extra band member just for Halloween night, who would it be and what would they play?

Zombina and the Skeletones are still touring up and down the rotting rolling hills of England so check them out! Also by the end of the week I will be reviewing the Halloween EP they have released free! Want to know where you can get it? Well I will tell you soon 😉